SAN JOSE, Calif. -- "A state appeals court on Friday rejected Apple Computer
Inc.'s bid to identify the sources of leaked product information that
appeared on Web sites, ruling that online reporters and bloggers are
entitled to the same protections as traditional journalists."

"In no relevant respect do they appear to differ from a reporter or editor
for a traditional business-oriented periodical who solicits or otherwise
comes into possession of confidential internal information about a company,"
Justice Conrad Rushing of the 6th District Court of Appeal wrote in a
unanimous 69-page ruling.

"We decline the implicit invitation to embroil ourselves in questions of
what constitutes 'legitimate journalism," he wrote. "The shield law is
intended to protect the gathering and dissemination of news, and that is
what petitioners did here."
Posted by - at 9:50 AM No comments: 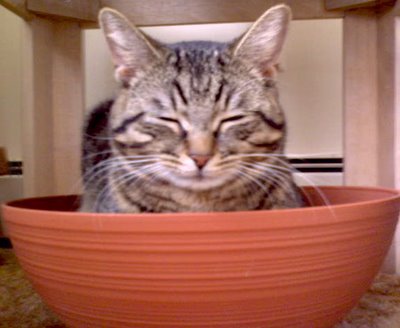 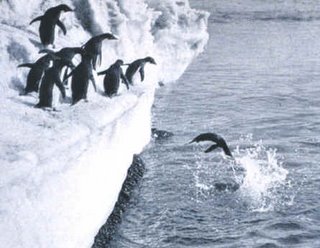 Kappes, Outsed By Goss, Is Back

"Steve Kappes, a recently retired CIA insider, has been offered the No. 2 slot at the spy agency, sources told CNN, to reassure the CIA operations community about Gen. Michael Hayden's appointment as director as well as ease concerns about that nominee's military ties.

The decision to tap Kappes is also seen as a move aimed at members of the powerful Senate Intelligence Committee who have raised doubts about Hayden.

Kappes was a civilian operations officer who reportedly was forced out of the CIA by Porter Goss' associates after Goss became director in 2004.

Intelligence analysts and former intelligence officials said that Kappes' selection is a repudiation of Goss, who abruptly announced his resignation Friday after reported disagreements with National Intelligence Director John Negroponte."
Posted by - at 1:46 PM 1 comment:

EVERYONE GETS A PENGUIN 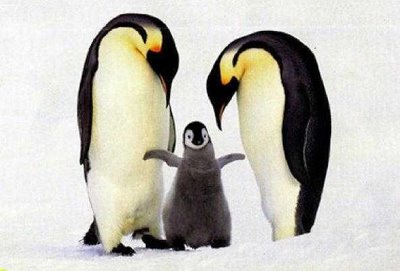 WASHINGTON — President Bush's approval rating has slumped to 31% in a new USA TODAY/Gallup Poll, the lowest of his presidency and a warning sign for Republicans in the November elections.

BAYOU SPRINGS, ARKANSAS (AP)- President Geroge W. Bush has told a Polish paper that his greatest moment in more than five years as President is capturing and managing to kill an elusive ivory-billed woodpecker.

"You know, I've experienced many great moments and it's hard to name the best," Bush told weekly "Poland Spring" when asked about his high point since becoming president in January 2001. "I would say the best moment of all was when I nailed an ivory-bill out on the swamps," he told the newspaper in an interview published on Sunday.

"You know, those dang things are pretty much extinct, so finding one is not easy. And this sucker put of a hell of a fight before I finally managed to bag it," the President said.

The ivory-billed woodpecker, a magnificent bird, was until recently thought to be extinct, but the U.S. Department of Interior has a said a few may still exist in the wild.

"At first, I though it was a pilated pecker, but then I saw the flashing white wings and whispered, 'Dick, it's an ivory-bill!' I unloaded my rifle and emptied Saddam's pistol at it, but the critter hid in a tree. Finally, I grabbed an Uzi from one of my Secret Service guys and took it down," said the President.

Experts have determined that Bush got a true ivory-billed woodpecker, although "Dick hit the guy from Cornell [the Cornell Ornithology Lab] when his shotgun went off," the President said, referring the Vice President.

"As Paul Wolfowitz would say, 'ladies and gentlemen, I got him,'" the President added, grinning. 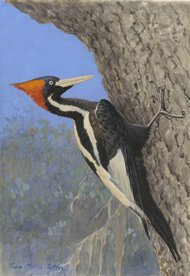 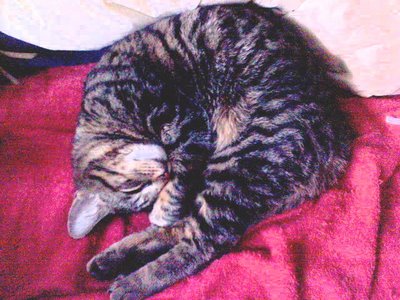 There's a Fire in the Barn?

It's a good place to shop, by the way. I just spent some of my hard-earned money on Barney. I bought him a couple of toys to chew on -- but don't let him know until I get over there, because it's a surprise.
- George W. Bush

"What's that, boy? Timmy fell down a well?

"What, American invaded a Middle Eastern country based on lies, thus trapping our soldiers in a quagmire and exacerbating problems of international terrorism?"

Some people have said that we should only teach and speak English in the USA, saying "We are Americans and our language is English." But this kind of nativist, ignorant thinking is wrong.

If the nativists want to speak English, let them move to England, where they can hear it all they want.
Posted by - at 11:18 AM 1 comment: