London (AP) -- An auction house says it will offer for sale artworks from the ancestral home of Diana, Princess of Wales - including an $18 million Rubens portrait from
the 17th Century.

Christie's auction house said Monday it will sell $30 million worth of artifacts from Althorp House, in Northamptonshire, central England. Althorp is the home of Diana's brother Earl Charles Spencer, who recently announced his engagement to Lady Bianca Eliot.

The Rubens portrait -- "Commander Being Armed for Battle" - has been owned by the Spencer family since 1802. Other lots include a painting by Giovanni Francesco Barbieri and 19th Century horse-drawn carriages.
Posted by - at 7:03 PM 1 comment:

An individual, including a citizen of the United States, determined to be an unprivileged enemy belligerent under section 3(b)(1) in a manner which satisfies Article 5 of the Geneva Convention Relative to the Treatment of Prisoners of War may be detained without criminal charges and without trial for the duration of hostilities against United States or its coalition partners in which the individual has engaged, or which the individual has purposely and materially supported, consistent with the law of war and any authorization for the use of military force provided by Congress pertaining to such hostilities.
Posted by - at 7:18 PM No comments:

I, For One, Welcome 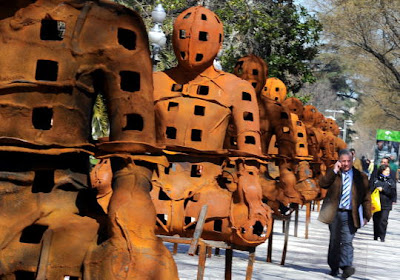 What Took So Long?

The New York Times, after immense pressure, has finally, belatedly, seen seen fit to revist the accuracy, or lack thereof, of their ACORN reporting. The short version if that they fell for a childish hoax. Worse has been their resistance to embrace a culture of truth. This is a story about what Acorn is, or is not guilty of, and also what the hoax perpetrators are guilty of as well. But it is also a story about The New York Times, and how it has misled readers for months, to push a conservative political agenda, and its convoluted, desperate attempts to avoid telling the truth.
Posted by - at 5:05 AM 1 comment:

Really? Even after winning an Oscar? 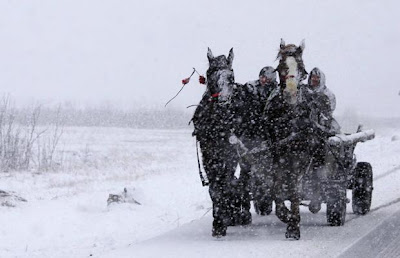 Radu Sigheti, Reuters
Posted by - at 5:58 PM No comments:

“I am absolutely confident that we are going to be successful,” Axelrod said on NBC’s “Meet the Press” program. Appearing also on ABC’s “This Week,” he said, “health care deserves an up or down vote, and health care will get an up or down vote.”
Posted by - at 11:36 AM 1 comment:

Senate Majority Leader Harry Reid, in a letter to his Republican counterpart, said that Democrats plan to use reconciliation to pass final health-care legislation.

Many Republicans now are demanding that we simply ignore the progress we’ve made,” Reid said in a letter today to Senate Republican leader Mitch McConnell of Kentucky. “We will not. We will finish the job,’’ adding that “we plan to use the regular budget-reconciliation process."

As you know, the vast majority of bills developed through reconciliation were passed by Republican Congresses and signed into law by Republican Presidents - including President Bush's massive, budget-busting tax breaks for multi-millionaires. Given
this history, one might conclude that Republicans believe a majority vote is sufficient to increase the deficit and benefit the super-rich, but not to reduce the deficit and benefit the middle class. Alternatively, perhaps Republicans believe a majority vote is appropriate only when Republicans are in the majority. Either way, we disagree.

Wow. Harry Reid's letter to Mitch McConnell.
As Ezra says, this can be summed up as: Reconcile this.
Posted by - at 3:18 AM 1 comment:

The Time For Talk Is Over

"The time for talk is over. We need to see where people stand, and we need all of you to help us win that vote.

So I need you to knock on doors, talk to your neighbors, pick up the phone. When you hear an argument by the water cooler and somebody's saying this or that about it, say, "No, no, no, no. Hold on a second."

And we need you to make your voices heard all the way in Washington, D.C. They need to -- they need to hear your voices because right now the Washington echo chamber is in full throttle. It is as deafening as it's ever been. And as we come to that final vote, that echo chamber's telling members of Congress, "Think about the politics," instead of thinking about doing the right thing."

Oscars Audience Up Despite 'Avatar's'
Loss to 'The Hurt Locker' 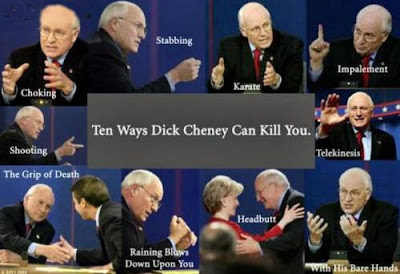 Sad news about a writer most of us knew as the satirist Jon Swift.
Posted by - at 6:50 PM No comments:

You know, if David Paterson had

had the State Police threaten the legistature, people would probably have supported that.
Posted by - at 3:19 AM 1 comment:

NYT: Truth Not Worth the Effort

New York Times:
"I still don't see that a correction is in order," he continued amazingly, "because that would require conclusive evidence that The Times was wrong, which I haven't seen. The Times could seek out all the employees, but I don't think that's a realistic prospect worth the investment of effort."