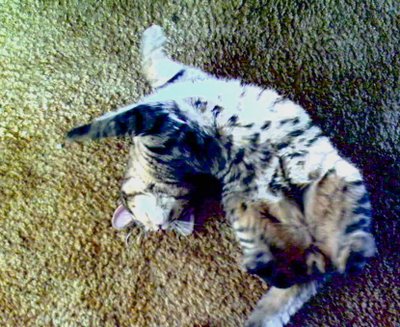 "After waiting 13 weeks to respond to his accusers, Kenneth L. Lay lost his legendary cool on the witness stand Wednesday.

Just minutes into his cross-examination by a prosecutor, John Hueston, Mr. Lay, Enron's founder and former chief executive, testily accused Mr. Hueston of personally preventing him from repaying a company credit line Mr. Lay had used to shore up his personal finances.

"Mr. Hueston, you know you blocked it," Mr. Lay said, his voice booming. "It's a simple answer."

Before he took the stand, a number of legal experts had predicted that Mr. Lay would use the same folksy charm he employed during his heyday as the public face of Enron to seek to win over the 12 jurors deciding his fate in the criminal fraud trial here. But during his three days so far as a witness, Mr. Lay has found it harder and harder to maintain a kindly grandfatherly image.

Instead, Mr. Lay, 64, has become increasingly agitated, at times reacting impatiently even to his own lawyer, George McCall Secrest Jr., and lashing out at what Mr. Lay portrayed as a cabal of former Enron executives, investors and journalists whom he repeatedly blamed for the company's downfall in late 2001."

A BLACK HOLE IN EVERY GARAGE

A new study finds that supermassive black holes, located at the heart of some galaxies, are the most fuel efficient engines in the universe.

"If you could make a car engine that was as efficient as one of these black holes, you could get about a billion miles out of a gallon of gas," said study team leader Steve Allen of the Kavli Institute for Particle Astrophysics and Cosmology at Stanford University.

"I base a lot of my foreign policy decisions on some things that I think are true. One, I believe there's an Almighty. And, secondly, I believe one of the great gifts of the Almighty is the desire in everybody's soul, regardless of what you look like or where you live, to be free."


So what exactly did Pat Robertson say about abortion, Hurricane Katrina, and terrorism?

From this weekend on CBS:

“But-- there was one-- at one point where you seemed to suggest that-- Hurricane Katrina and September 11th, the terrorist attacks, were divine retribution for abortion—“

“Oh, I'll stop you on that one. There was Comedy Central that came out with a-- a-- a-- a-- a spoof saying Pat Robertson said Katrina was-- was-- divine retribution. And then the press picked it up. And Comedy Central said, ‘Hey fellas, we were just joking.’ I never said that.”

“So you never said that—“

What did Pat Robertson say?


“You know, it's just amazing, though, that people say
the litmus test for is whether or not he supports the
wholesale slaughter of unborn children. We have killed
over 40 million unborn babies in America. I was reading,
yesterday, a book that was very interesting about what
God has to say in the Old Testament about those who shed
innocent blood. And he used the term that those who do this,
"the land will vomit you out." That -- you look at your --
you look at the book of Leviticus and see what it says there.
And this author of this said, "well 'vomit out' means
you are not able to defend yourself." But have we found
we are unable somehow to defend ourselves against some
of the attacks that are coming against us, either by
terrorists or now by natural disaster? Could they be
connected in some way? And he goes down the list of
the things that God says will cause a nation to lose
its possession, and to be vomited out. And the amazing
thing is, a judge has now got to say,
"I will support the wholesale slaughter of
innocent children" in order to get confirmed to the bench.
And I am sure Judge Roberts is not going to say any such thing.
But nevertheless, that's the litmus test that's being
put on, the very thing that could endanger our nation.
And it's very interesting. Read the bible, read
Leviticus, see what it says there.”

"The ACLU's got to take a lot of blame for this."

"And I know I'll hear from them for this, but throwing God out successfully with the help of the federal court system, throwing God out of the public square, out of the schools, the abortionists have got to bear some burden for this because God will not be mocked. And when we destroy 40 million little innocent babies, we make God mad. I really believe that the pagans and the abortionists and the feminists and the gays and the lesbians who are actively trying to make that an alternative lifestyle, the ACLU, People for the American Way, – all of them who try to secularize America – I point the thing in their face and say 'you helped this happen'."

"I totally concur, and the problem is we've adopted that agenda at the highest levels of our government, and so we're responsible as a free society for what the top people do, and the top people, of course, is the court system."

"Secretary of Defense Donald H. Rumsfeld said Tuesday he would not engage in "fantasyland" speculation about a possible U.S. attack on Iran, though he said the Bush administration is concerned about Tehran's nuclear ambitions.

Rumsfeld declined to comment on Iran's claim that it has has successfully enriched uranium for the first time.

"I'd rather wait and see what our experts say about it," the defense secretary told reporters shortly after the announcement from Tehran."

Have They No Sense of Decency Left?

So yesterday we found out who the person was who released Valerie Plame’s name, as well as other vital national secrets, to a reporter as part of a disgusting slime and defend attack on Joe Wilson, which was itself part of a larger plan to cover-up the Administration lies promoting the invasion of Iraq.

It wasn’t Scooter Libby. It wasn’t Dick Cheney. It was George W. Bush himself. Of course, Scooter held the meeting with Judith Miller, where he disclosed the classified NIE, on the orders of Dick Cheney, on the direct orders of George Bush.

So said Scooter Libby under oath. The story has been out for almost two full days and has not been denied by the White House. Rather, the spin seems to be that Bush has the authority to do this as President.

Will this fly? Or will this finally be the sordid incident in a wasted career of a pathetic life that brings George Bush down?

He deliberately exposed the identity of an undercover CIA agent (who was working to prevent the spread of nuclear weapons) and revealed other national secrets to just threaten her husband, a hero who had stood up to Saddam Hussein in 1991, and who was asking questions about Bush’s reasons for going to war.

Will be people be outraged by this? Or will they buy Bush’s and the media’s argument that it’s okay, because when the President decides to leak a secret, it’s not a secret anymore because he decided to leak it?

Is that what this country has been reduced to? Bland acceptance of treason based on bullying and fear? Is this the newest twist on Nationalism? A hyper-aggressive embracement of mean-spirited cruelty, even at the expense of the safety of the country?

Where the decent part of nationalism is replaced the crude tactics that often accompany it -- intimidation, threats, violence, until, in the end, that is all it celebrates?

Should we have seen this coming with the treatment of John McCain in the primaries in 2000? With the mob that stormed the election office in Florida to rob Al Gore of the election? With the Swift Boating of John Kerry?

Have they shame? No sense of decency left, at long last?

Will this be George Bush’s legacy? To have debased and corrupted American politics, to have taken government to a new low, lacking all humanity, and any sense of restraint that are the hallmarks of civilization?
Posted by - at 5:11 PM No comments:

"Telling an aide to leak classified information to the New York Times is not a normal channel."


Yes. He should have gone through Corpus Christi Caller-Times instead.

According to the AP, citing court documents, Lewis Libby, Dick Cheney's top aide, has testified under oath that Cheney that said President Bush authorized the leak of sensitive intelligence information about Iraq.

The court filings allegedly say that Libby testified to the grand jury that Cheney told him to pass on information and that Bush himself who authorized the disclosure.

This led directly to July 8, 2003, conversation between Libby and Judith Miller, where Valerie Plame's status was discussed, according to Miller's grand jury testimony.

But the court documents state that Libby revealed vital American national secrets "only after the vice president advised defendant that the president specifically had authorized defendant to disclose certain information in the National Intelligence Estimate."

"Defendant testified that the circumstances of his conversation with reporter Miller -- getting approval from the president through the vice president to discuss material that would be classified but for that approval -- were unique in his recollection."
Posted by - at 10:37 AM No comments: 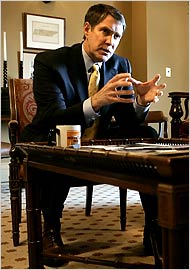